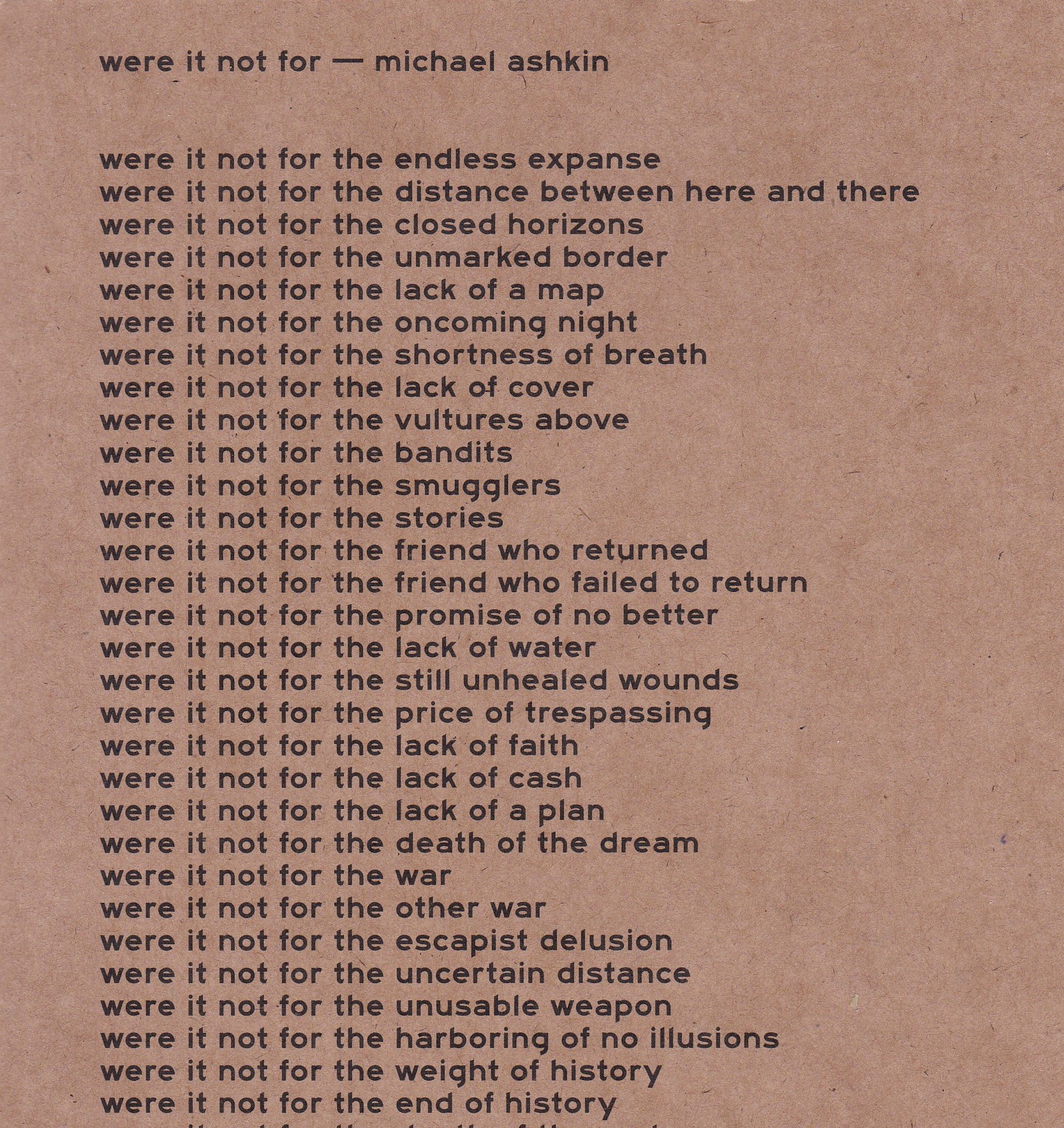 Michael Ashkin is an American artist.

Episode 113: Michael Ashkin‘s Were It Not For (FW:2019) was an incredible eye-opener for me when I received it last year. I had already been familiar to some degree with his work as we share some interests in location and aesthetics and we had covered his book Horizont (TIS, 2018) previously on American Suburb X. 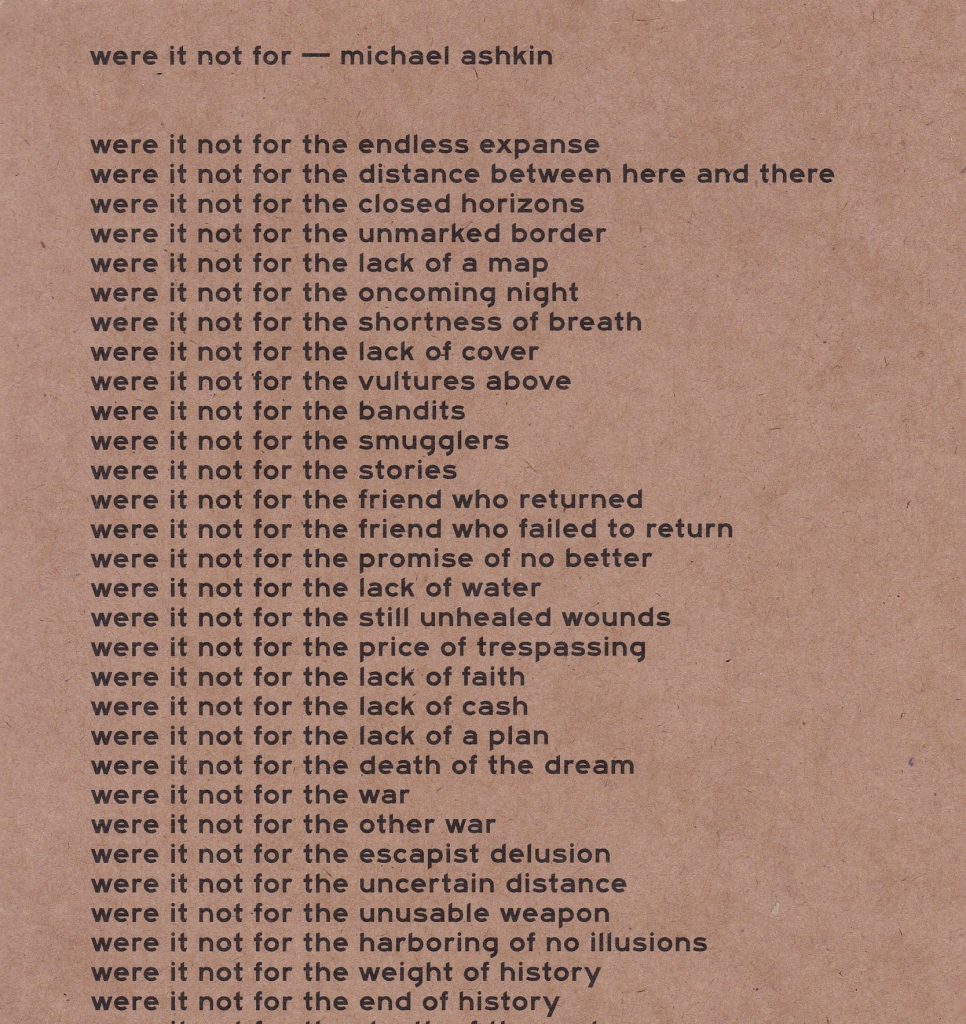 Ashkin’s work is kind of hard to explain despite it looking somewhat straightforward. There are elements to the work which suggests an eye unafraid to register decay, loss and urban change. It is an eye that remains consistent when he takes it to Western America as seen in Were It Not For. That book bears the perfect hallmarks of being considered, consistent and poetically political. The design, particularly the cover is a veritable mantra of life lived through the previous decade of America and its imperial motives and dreams. 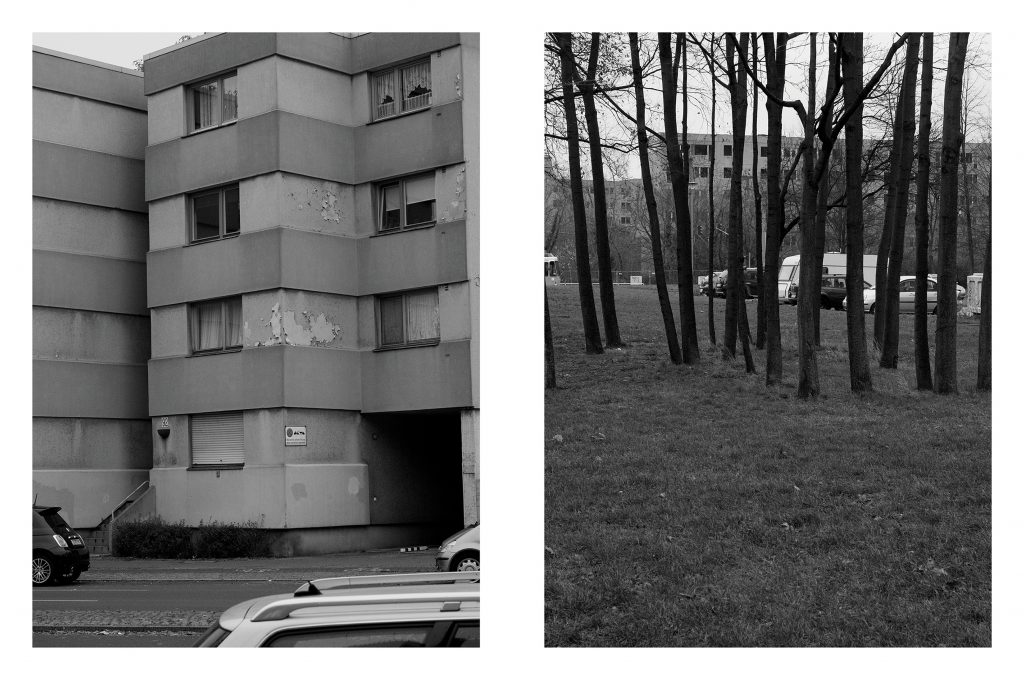 In Were It Not For, nothing is cast as overly deliberate and the images and book itself create a pathway in which to project and register associations to the American landscape and the political nature of ideological decay. There is a feeling of indebtedness to Robert Adams and the beauty found in decay that he illustrated in the poetry of his photographs of tract homes in Colorado. However, Ashkin is probably closer aligned to Lewis Baltz and his work Candlestick Point in particular. 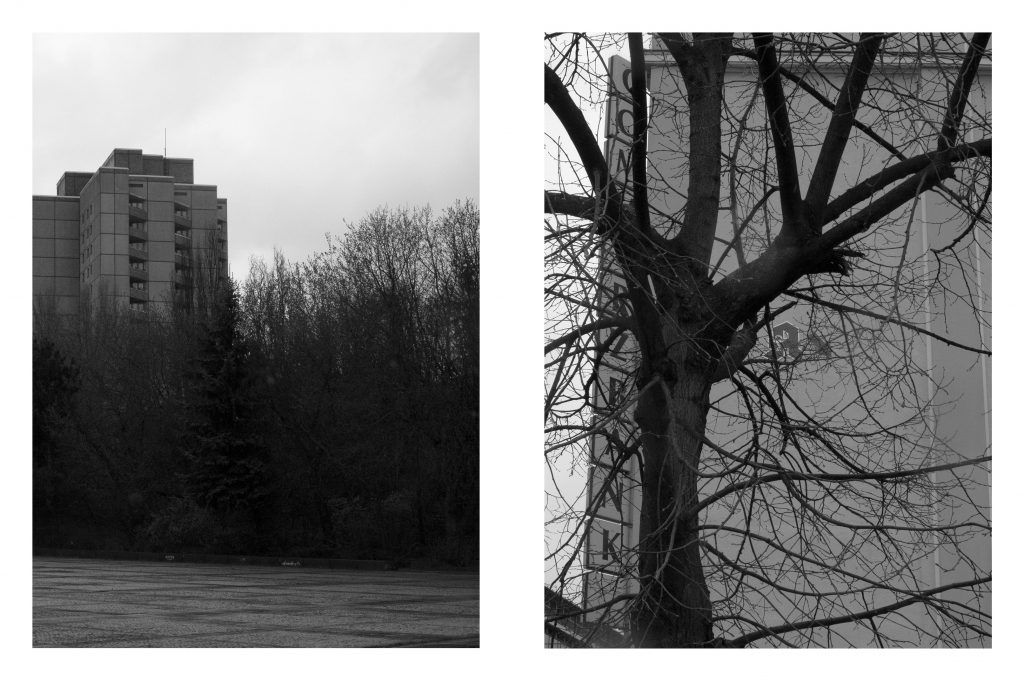 Ashkin’s Horizont is a slightly different matter. Whereas a similar investigation of neglected space, graced by a compacted frame exists as in WINF, the images in Horizont find themselves nestled into a particular tradition based on geography. Ostensibly, the work is about cities and our interactions with the built environment in both observation and construction. However, it is impossible to forgo the history of place in Horizont as it is a work made in Berlin. Berlin, a town of haunts, ghosts and dissolve has a rich tradition on the aesthetic that Ashkin implores. It is a city of pock-marked hinterlands, ideologies that are embedded in its surface. Decay is a feature of reason and the urban environment that Ashkin walked breathes out a subliminal anima of distress. 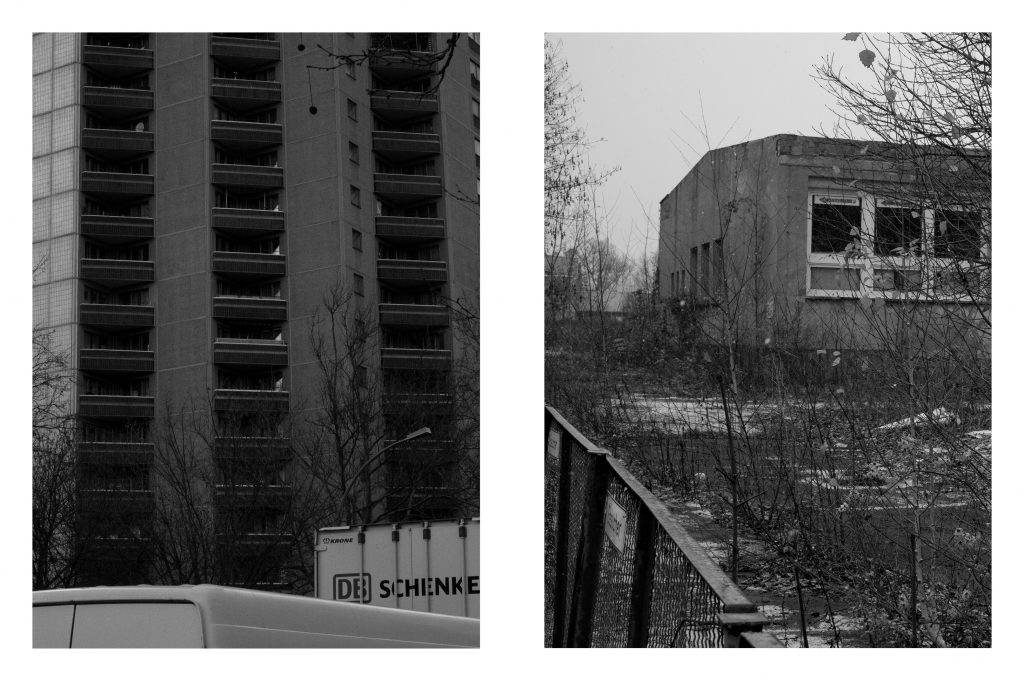 In considering Berlin, Ashkin is asking us to consider the urban environment, but also the historical materialism of our imagined co-habitated spaces and the rhythm of its many functions both in terms of housing and the mechanics of civilization and the history that pervades his frames and a imagined condition of recollection. The post-war Berlin imagination is rife with a brooding sense of calm, often exacerbated by the grey concrete sludge of its streets and the bramble and thicket of its hinterland warrens where you find relics of imagined civic and municipal planning left unattended and unused-escalators and stairs lead nowhere and train terminals are lit by a haunting glow in their non-functioning status. 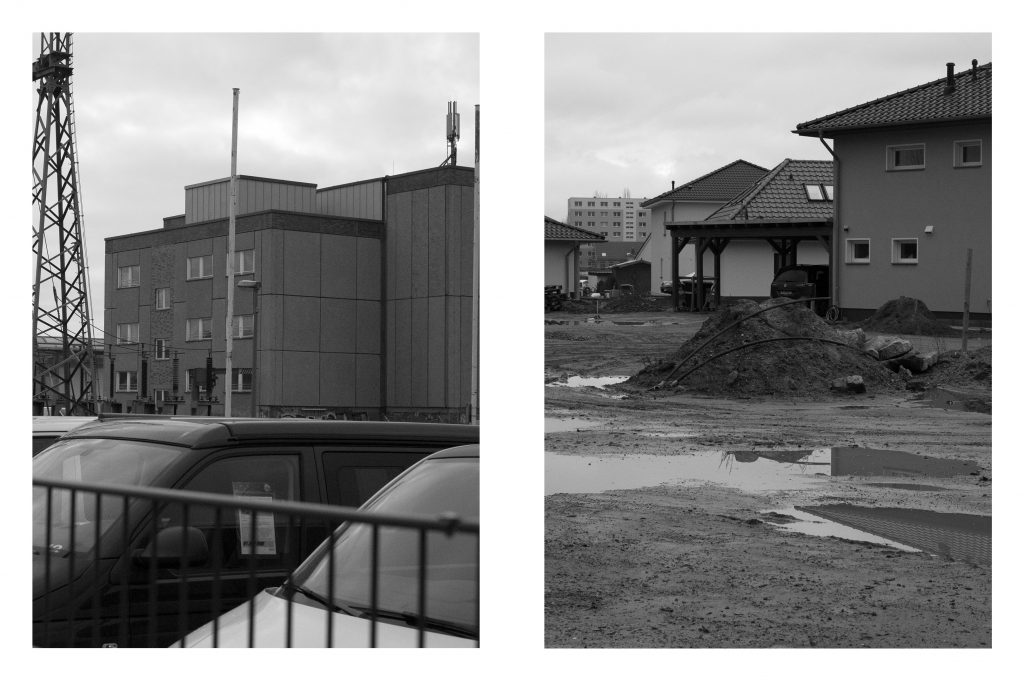 Ashkin, an American abroad allows the city to bequeath its condition, mood and atmosphere into his frames. He becomes infected by the weight of history and the image of the city that it presents to those who begin to absorb said condition. If you are looking past the surface of Berlin and its clubs, its tourist McDonald’s version of the Wall as it stands today, you cannot help but be affected. I have been there. I understand the permeation and gravity of the city’s weight and the dull throb on the senses and the back of my skull. Horizont, in questioning the built environment also surrenders itself to this very condition born of echo and resolute decay. 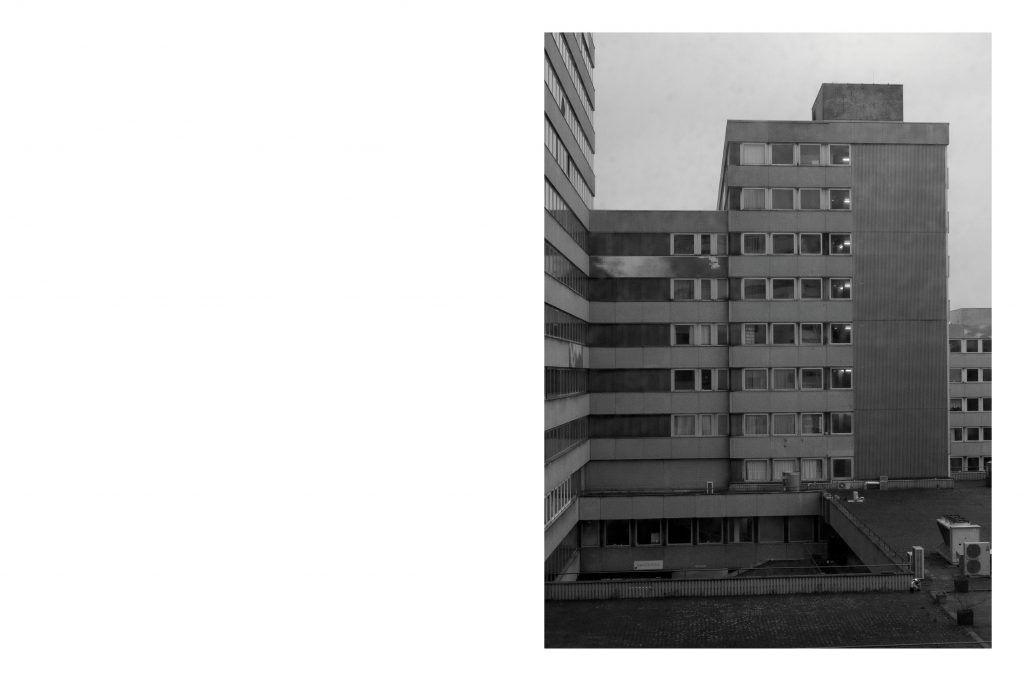 The book is designed in an interesting manner in which the images on each page of the spreads bleed together through composition and are joined by focal shifts of objects that relate in frame to one another on opposing pages. You can see this exemplified by the rhyme of street lights, various poles rising from the ground which stop cars from leaving their impressions on buildings spread across two pages and so forth. In essence, the images become stitched together and create brilliant interludes of a flat and compressed use of space in which the weight of Berlin’s condition compels itself onto the reader securing the advantage of mood atop the brilliant use of “joiner” sequences between the frames only occasionally broken by the interjection of a blank page. 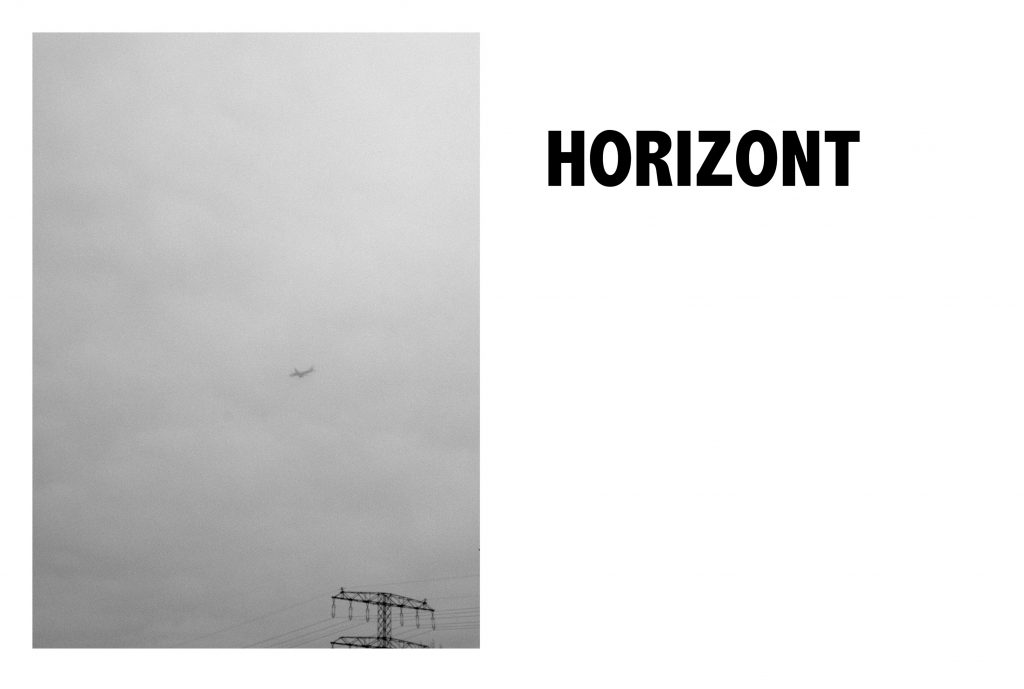 Horizont, like Were it Not For is a mediation of time, of environment and the uses of the observable “extras” and voids that line a landscape. Decay is present and a morose sense of observation often accompanied by the best of artists investigating civilization remain a constant in both. There are questions, not answers and in that observation itself we are presented with an unerring and unflinching honesty that asks us to consider the gravity of our world and our imprint on it while also questioning what is real, what is felt and what is the point. Ashkin is building a world through his books that sever the myopic cord we are accustomed to seeing with when we think of human progress. He, in some ways is asking that we resolve ourselves to the moment and not the paucity of the future.